During this period I continue with my remote mixing and mastering, on-line support and tuition. These are the only ways that I am currently working. For support I am using Chrome Remote Desktop (or Screen Sharing for Mac) in conjunction with either FaceTime, Skype or Zoom. Please use one of the links below for details of how to contact me. While this is the case, lessons can be as short or as long as you need. From 10 minutes to a few hours. I will only charge for the time that I spend on helping you out. I don't go much over 2 hours in general because it can be too intense in terms of the amount of information you may be trying to take in and I find it better to break lessons up in to more manageable chunks. Call or email me for an appointment.

On this page you can see my current and recent projects and the services I can provide for you.

Subject to current constraints of Covid-19.

I am usually available to work in the studio or on location to help record, mix or master songs and also to control the sound at your live gigs. Editing and Mixing can either take place at your studio or in mine. I will work on projects from the start or after you have done all your recording. I will master tracks in my studio. Please contact me for an estimate of costs.

I am happy to help with all parts or any part of the process. 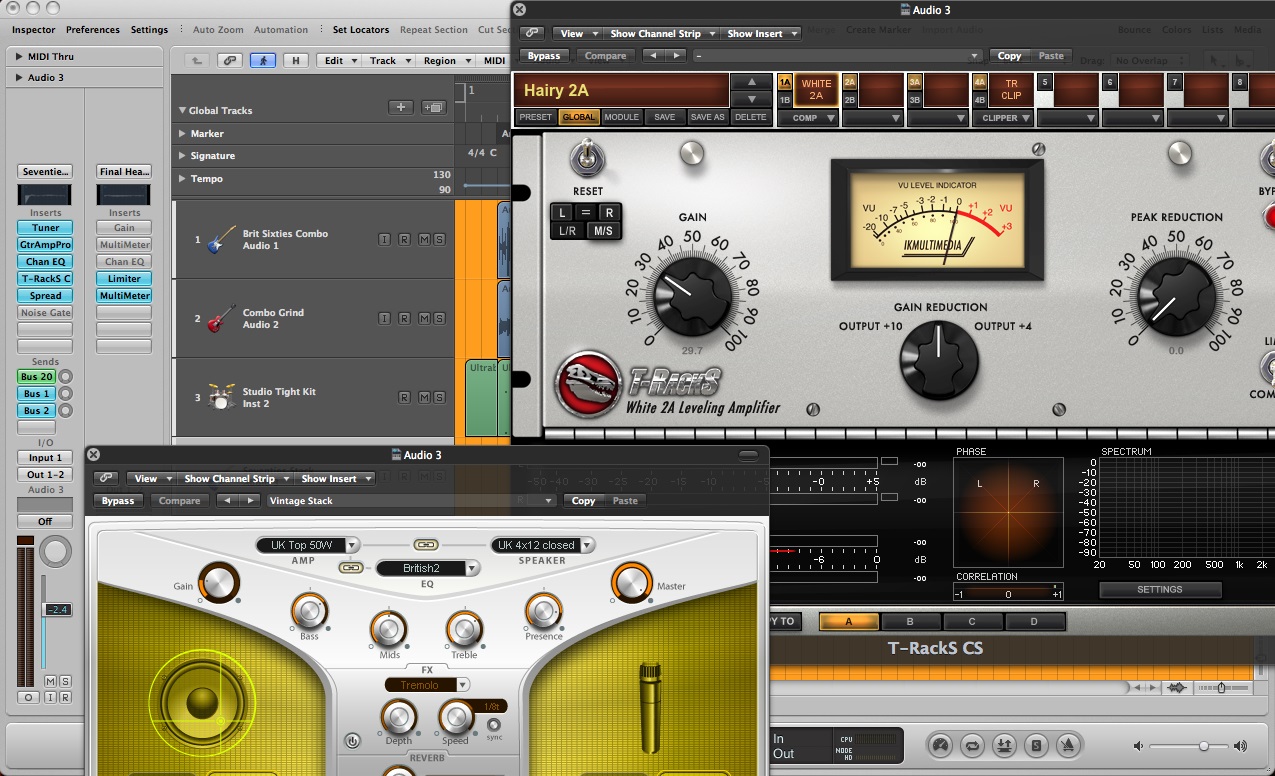 Get your recordings professionally mixed and mastered. Everything can be done remotely. Files can be transferred electronically or delivered on CD/DVD or any sort of Drive if you prefer. By using remote services you can keep costs down. Prices given for individual tracks, EPs or whole albums of material.

I have all the necessary facilities to edit, mix and master tracks for you. I use Digital Performer, Cubase, Pro Tools, Harrison Mixbus or Logic Pro X and Logic Studio 9 on a MacBook and Mac i7 Quad Core with MOTU, AVID and Focusrite interfaces. Additionally, I have a Yamaha mixing desk, TC Electronics Reverb, ADA8000 Preamp with ADAT, the latest T-Racks vintage modelling effects, other effects from Soundtoys, Softube, Slate Digital, Focusrite, TC Electronic and Waves and a Behringer compressor.

I have facilities to record vocals and some instruments. I have two ART valve Mic Preamps and microphones by AKG and 4 handmade mics from American company 12 Gauge. I have guitar and bass amps and effects if required.

I also use different studios in Sussex which are suitable for different situations and can arrange sessions here when necessary with me running the session. These studios have an extensive list of equipment also.

Set up of PA etc. and mixing. For details of the sort of gigs I have been involved in see below under current and recent projects and Live Music.

I have experience using Analogue and Digital desks, hard disk recorders and using software based tools such as Cubase, Logic, Digital Performer and Pro Tools. When recording it is important to ensure that the correct tools are used whether it be condenser microphones such as Neumann, AKG and Audio Technica or dynamics such as Shure.

I have been FOH engineer for the Paul Raymond Project at gigs to launch Paul's albums "Rewind 50" and "Terms and Conditions apply". These gigs were at the Borderline in Charing Cross Road. Go here for some recommendations from Paul and Rob.

I worked on a theatre tour for 4 + years and have been the Engineer for over 250 shows. In venues ranging from 600 to 3,000 capacity. I have also been the sound engineer for various bands and events.

All musical styles catered for, and any instrumentation.

I am currently on the look out for talented individuals or bands who would like to record and try and get a recording deal. I can help write the songs for you or you can bring your own songs and record them. If you are interested please follow the link at the foot of the page.

I have been working on an EP "Time To Say Goodbye" for Bob Stone which is just about to be released (April 2021). It is two choral pieces that were very challenging but great fun to mix. Many movements and layers of vocals on the main track "Commemoration". It's great to get away from the mainstream sometimes to do something completely different. You can have a listen here.

I am working with a songwriter/sculptor David Josan on a song to go with an art installation. You can see David's videos here.

I am helping a songwriter who has written a concept album and I started off by remixing one of his songs as a learning tool for him to remix that song himself and then the rest of the album and I am mastering the album as well. More info to follow.

Recent and Past Projects

I mixed and mastered Beautiful Accident for Tim Boat in April 2020. It was released on Bandcamp in May 2020. You can listen or buy the track on Bandcamp now.

I mixed and mastered an album for Brandin which should have been released summer 2020. Like many things it seems to have been postponed for a while until things get back to normal.

I have been working on the soundtrack for the film Salt City which was released at the end of July 2018. I mastered the soundtrack and jointly mixed it with Brandin Fennessy. Please see Facebook for more information. It was released on Amazon for download, stream or as a DVD and also on Demand via Vimeo in February 2019.

Mixing, Mastering and co-producing a new album called High Definition for Paul Raymond. Being released 15/2/2019. You can listen to excerpts on the website or buy the CD direct from the website.

Recording another live classical performance at the 1901 Arts Club, Waterloo on in December 2018 for Keith Burstein. This year it was piano, cello, clarinet and a mezzo soprano.

Recording the first night of a brand new opera at the Arcola Theatre in East London. The opera was part of the Grimeborn Festival, and was called "The Prometheus Revolution" and written by Keith Burstein. For more information please click here. I recorded this using my 12 Gauge cardioid condensers for the main area and an AKG on the piano just in case it got lost behind the vocals. It was a great experience with a fantastic group of performers. Got a great result using the 12 Gauge mics.

Thanks to Keith Burstein for the recommendation taken from his email to me afterwards which is shown below.

Recorded the Mayberries in Mayfield in July 2018. We did a recording session for a whole day, getting 5 tracks down for a demo CD.

Live sound for Beldon Haigh at a BBC Radio Kent session going out live in February 2018. You can find a video of one of the songs recorded on the day below.

Recording a live classical performance at the 1901 Arts Club, Waterloo on a snowy day in December 2017 for Keith Burstein.

Recording and mixing tracks for myself and Mark Mahoney for an album under the band name Bar Trek. This is now finished and was called Beautiful World and was released late 2017.

Recording an album for Bob Stone. Mixing completed in June. Released in July 2016.

Some post processing and mastering of some acoustic guitar tracks for a promotional film to be released summer 2016.

To see a full list of my past projects please click here. You will find details of work I have done with Paul Raymond of UFO, Cutting Crew, Martin Turner's Wishbone Ash, Steve Hackett, John Wetton, Focus and many others.

The Girl from Nowhere EP by Kristelle Graff. Amazing songwriter and singer.

"Thinking of You" by Sue Cope. Sue was round with a Cello player and another singer for us to put together a new arrangement of this song. We recorded a Piano and vocal track nearly 3 years ago and we have now put together this new arrangement. We are hoping this will see release for Christmas.

I recorded my band The Pyrats for our first and second demos. Follow the above link to go to the MySpace page.

I recorded my previous band Breakout for our last 5 demos.

I recorded the Downsmen Corps Marching Band. A 17 piece band playing a selection of tracks from the movie 'Grease' for a CD which they have put together for family and friends. The 3 tracks were recorded live in the studio, all 17 instruments at the same time with only 2 overdubs required.

Recorded and mixed a demo CD for the duo "After Dark". Containing 14 tracks, this was recorded at LMS and then mixed at home (2003).

FOH engineer for the Paul Raymond Project. Follow the link for some recommendations from Paul and Rob.

3 Wise Men and a Virgin at Trading Boundaries Xmas 2015.

Kiran Ahluwahlia at the Nehru Centre for the album launch of Sanata: Stillness.

The Young Folk when they are playing around the area.

Tar Babies - One of their Christmas gigs at Trading Boundaries.

Set up of all the gigs of the Pyrats, Breakout, Roadster and now for my current bands In Transit, Bar Trek and Gentleman Rogues.

Sound Engineer at the Proms in the Park in Hassocks, Sussex in July 2008. Three bands in under 4 hours with an attendance of around 800. I was controlling front of house and a 4 way monitor mix.

Pop Fiction are another band that I have helped out.

Infrasound had a gig at the Railway in Crawley for a record company executive in September 2004.

Player for all but one of their gigs before they split in September due to various external pressures.

I was also at the controls for another local band Drella. (2005)

I must take this opportunity to thank you for what I believe is one of the best audio recordings of anything I've ever had - or in fact of anything!

I don't know how you achieved it in terms of positioning of mics, but wherever the singers move they always remain equally clear while at the same time the sense of their spatial movement is conveyed and adds interest and drama.

Equally remarkable is the recording of the piano- which sounds magnificent and is in perfect balance with the singers!

All in all a remarkable achievement of recording by you Steve- and all the more so because it was a live capture on the night and I understand from Jason that you were both given very little assistance by the powers that be and were really left to just make the best of it - at which you succeeded consummately.

I look forward to hearing how you think it all works together- audio and video.

And many thanks again for a brilliant audio outcome!

Its Rob Wolverson here, guitarist with P.Raymond Project. Thanks a lot for doing what you do last night, had some great feedback from the audience and that's the first time a live engineer has done my guitar sound justice, look forward to working with you in the future. "

A big thank you for your sterling work on friday night. From my point of view it is vital to have good technical support so I don't have to worry about anything going wrong and you both handled everything like the true professionals you are. Steve, I've the been told the FOH sound was great, which is the most important thing." - Paul Raymond