On this page you can see my past projects.

Sound Engineer for an Arts and Music Festival in Sussex (Summer 2016 and 2017), using a Digico Digital desk.

Engineering for Son Yambu at Trading Boundaries in May 2016.

All recording, mixing and mastering for Little Drum Machine Boy which Vice Versa put out as a free stream for their fans at Christmas (2015). Watch on YouTube.

Engineering for Cutting Crew iteration "3 Wise Men and a Virgin" at the Christmas gig at Trading Boundaries in December.

Mastering some of the Tim Boat 2 EP "All that I have". Featuring me on bass and acoustic guitar and some backing vocals. Also mastering Tim's single for Record Store Day "Back to You"

Mixing tracks with local musician Dave Hardington for an upcoming album. I then Mastered the album for him. The album "Carousel" by Sea Dreamers was out last year and is available on iTunes.

Mastering some of Tim Boat's latest EP "Get Yours", half the tracks previously mastered by a studio in Brighton, the most recent by me. Available on iTunes Music.

FOH engineer for the Paul Raymond Project at a gig to launch Paul's album "Rewind 50". This gig was at the Borderline in Charing Cross Road. Paul playing with a new band.

Live sound for Kiran Ahluwalia at the launch of her album "Sanata: Stillness" at the Nehru Centre in Central London for ARC Music.

Mixing and mastering "Rewind 50" for Paul Raymond. Out on general release January 2015. Great reviews of the songs and how the album sounds. Available on iTunes and Amazon (amongst others). Here is the link to buy it on Amazon.

Mixing and mastering "Wasted" for "Yodaclub".

Live sound for Young Folk at a couple of their local gigs in Sussex.

Live sound for Eternal Optimists at some local gigs including a benefit.

Mixing and mastering for Brandon's new band. I've mixed one track already and more on the way for an EP.

Paul Raymond - Mixing some more tracks for Paul for the album project that he started last year and some other work as well.

FOH engineer for the Paul Raymond Project at a gig to launch Paul's album "Terms and Conditions Apply". This gig was at the Borderline in Charing Cross Road and I used the in-house Yamaha LS9-32. Go here for some recommendations from Paul and Rob.

Cutting Crew - Recording their gig at Trading Boundaries in December 2012. Using my MacBook, a MOTU interface, my Saffire Pro and a Focusrite Octopre (from Yoghurt Rooms) I got a 24 track recording and it sounds amazing. We have 10 Cutting Crew tracks including new songs from the forthcoming studio album. Also recorded the Tar Babies gig at the same time.

Paul Raymond - Mixing tracks for a new album for Paul. Already completed 5 tracks and more are on the way. We also recorded a few extra parts as we were mixing.

Steve Hackett - Recording this acoustic gig at Trading Boundaries in June 2012. It sounds amazing and Steve loves my initial mixes. Now just waiting to see what he would like to do with them. Here's hoping for something in 2013.

Cutting Crew - Recording their gig at Trading Boundaries in December 2011. Additionally using a Roland 2480 hard disk recorder belonging to Karn Broad. I mixed and mastered 5 tracks from the Cutting Crew set and Nick from Cutting Crew came round and we put the finishing touches to this in March 2012.

Max Shire - Recording at a Woodside Studios in Sussex over 2 days.

Blu Monkey - Recording them at a Yoghurt rooms studio and then mixing and mastering these tracks in my home studio.

Lots of teaching for various people.

John Wetton (Asia) - Recording his gig at Trading Boundaries for his management company QEDG. AE Productions have shot a video of the gig and the audio is going to be mixed by QEDG.

Focus - Recording them at Trading Boundaries for their 2011 tour. Using 3 MOTUs (some provided by AE Productions).

Martin Turner's Wishbone Ash - Recording and mixing their Trading Boundaries gig while AE Productions have made a video recording.

Focus - Mixing tracks after a gig at Trading Boundaries in 2010 while AE Productions made a video recording. Go to Vimeo to see the video and hear my mix.

Brandy Buliay - Mixing tracks for Brandon, an American living in the UK. Going towards an album, Brandon is currently taking these songs out live.

Tar Babies - Mixing live sound for one of their Christmas gigs.

Mixing tracks for a musician/singer from Mauritius for release in his home country.

Recording and mixing three tracks for Sketch based in Surrey. Sounding really good, original pop/rock from some excellent musicians.

Kristelle Graff - Working with on her songs, mixing some of the best tracks I've heard for ages. The "Girl from Nowhere" EP was on sale on iTunes.

Silvertown Girl - Working with a local Songwriter and singer on some soul, R'n'B tracks. Also six of these tracks were out on iTunes.

Working with a DJ on some dance tracks this summer in my studio space.

Sound engineer to run a couple of conferences for different AV companies. Also involved in the set up of the facilities and pulling down at the end of the day.

Sound recordist for a cameraman while doing a shoot at a college in North London. Trailing round all day filming someone as they met current students.

Worked on 4 songs with a songwriter/guitarist in South East London. Just finished mastering the final mixes for his demo. Having to coax his 8 year old PC into managing, really not easy...

Sound Tech at the Trinity Theatre in Tunbridge Wells over Christmas and New Year 2007/8 and now various other dates too. In June 2008 worked on Steve Howe's show at the Trinity. 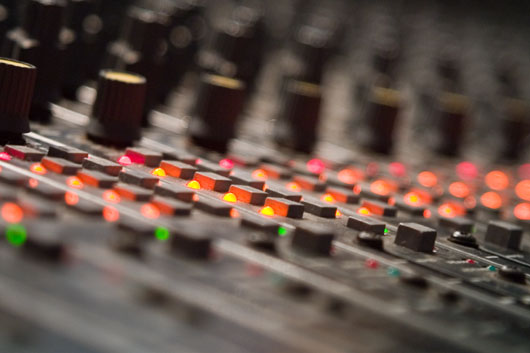 Sound Engineer at the Proms in the Park in Hassocks, Sussex in July 2008. Three bands in under 4 hours with an attendance of around 800. I was controlling front of house and a 4 way monitor mix. Also I had to make sure all microphones were in place which can be a little fraught with two 15 minute changeovers. Went really well. With something like this had to do a bit of work in advance to make sure they had all the right kit, from Mic stands to the right PA. Many thanks to Keith at TS Professional in Burgess Hill for providing an excellent PA, all the mics and cables etc. The bands were the Crawley Millennium band, The Don Bradmans and Ophlyne. See below for a copy of a letter of thanks.

I was sound engineer for Derek Acorah for over four and a half years. I was employed by Rainbow Productions. This show took place in theatres all over the UK and Ireland. The venue sizes from 600 to 3,500 people. Derek is the star of "Derek Acorah's Ghost Towns" and "Most Haunted" on Living TV. I shared the the dates with Karn Broad and John Taylor.

Further recording and arrangement of "Thinking of You" for Sue Cope. This got played on BBC Southern Counties Radio (Friday September 7, 2007).

Recording and mixing the demo songs for my band Pirate (now The Pyrats). These were all recorded live in Kev's front room.

A system set up for an arranger with many major credits over the last 20+ years. Using 3 Macs and various versions of DP.

Sound Engineer for Green-ish Day, Green Day tribute band, at their gig at the Indigo Club in Bordon, Hampshire on 30/6/07. Running the front of house and 4 separate monitor mixes. This was through the Bands on the Run agency based in Southampton.

Mixing 14 tracks on my set up for a London based songwriter with TV writing credentials.

Mixing a demo album for Max Shire a West London based singer/guitarist/songwriter in his studio.

Stage managing a World Music gig at St Mary in the Castle, Hastings in March 2007.

Sound Engineer at the De La Warr Pavilion in Bexhill for a performance of Shaping Voices, Creative Reminiscences in April 2007.

Teaching London based American songwriter Ashley Hamilton (number 1's both sides of the Atlantic) how to use Logic to demo his latest songs for a forthcoming album. 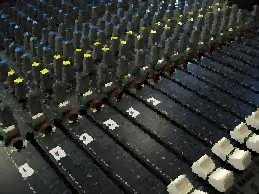 Sound Engineer at the De La Warr Pavilion in Bexhill for a performance of Shaping Voices, Creative Reminiscences in April 2007.

Recorded, edited and mixed an entire album for a school choir based in Sussex. November 2006.

Recording and editing vocals for four albums for Rainbow Productions.

Remixed 4 songs for a dance and fitness album for Rainbow Productions that is just about to be released in the US (August/September 2006).

Recordings of Dame Vera Lynn and Dame Judi Dench to be played at a concert held at Croydon's Fairfield Halls. Then recording the concert for inclusion with a DVD being shot at the same time.

A recording for a School in Sussex. Of three folk songs for an international folk album, being produced in Hungary. We recorded and mixed this in less than a day. (Summer 2005).

Digitally restoring a track from some old 4 track reel to reel tapes onto Cubase SX 2. So that it's writer can then record a new backing track on top of the original.

Helped Anna Krantz mix a demo for her publisher prior to it being sent to the States for a couple of big names looking for tracks.

A recording of 3 songs for Sue Cope called "Thinking of You", "Sixty Years on" and "Seagulls". Summer 2005

A demo recording for a local singer called Frida of "I'm not a girl" and "Against All Odds". April 2006

A recording for a local Hip Hop band. We recorded the vocals for three original songs in a day and re-mixed the backing tracks that they had put together elsewhere. Winter 2005

Recorded and mixed a demo for Breakout. (January 2005).

Providing PA and being the sound engineer at a premiere of 2 short films produced by St Mary's school in Bexhill in association with Sound Architect. At the White Rock Theatre in Hastings.

I engineered for Darren Terao as he recorded an album. Darren is a talented singer/ musician and songwriter, having played with Rochford, Dinah Carroll and Big Joe Turner. He spent sometime in the US writing with some big names and is also writing some numbers for some BMG acts. I have also helped Darren in the mixing of another artist called Paul Dickson for a couple of demo tracks that have been taken to the States.

Using a Roland VM-C7200 digital mixer to work on live engineering for Karn Broad of Dutch Uncle. I also used this desk to mix the 'After Dark' demo.

Worked as freelance engineer for Master Transcriptions, a voice only recording studio, in Tunbridge Wells, Kent. They produce CDs and tapes for the partially sighted on behalf of Government departments as well as commercial concerns.